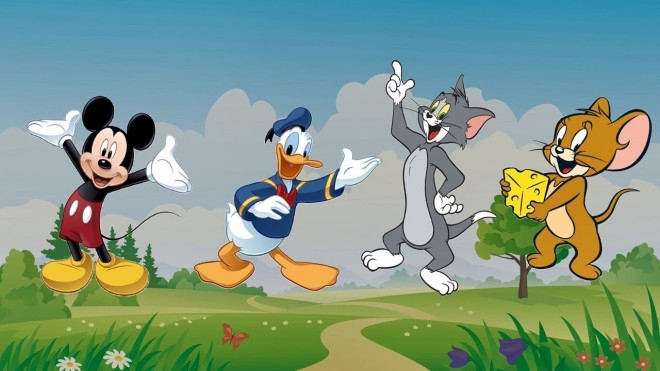 There may only be a few things in life that anyone with any background, including race, creed, color, religion, beliefs, nationality, upbringing, procrastination levels, binging habits, and the number of acquired traffic violations, can understand, appreciate and enjoy. No, I’m not referring to cannabis or alcohol. I’m not even referring to ridiculous Facebook status updates like ‘cough’. Go see a doctor in that case. The overtly sympathizing messages from your online connections aren’t going to drive the flu away. On the contrary, this exercise will provide you with a false sense of friendship and belonging until a situation arises when you really need someone. What was that? No, it’s not free Wi-Fi either. Come on people, it’s cartoons. Since we live in an age where we love screens of all sizes ranging from a square inch on our wrist to something large enough to cover a wall in our bedroom (I’m not counting cinema screens, which are as large as small ships, since most of us don’t own one), it makes us all the more willing to watch cartoons.

I have never met a single person who has not enjoyed at least one cartoon series or is a fan of at least one cartoon character. If you happen to claim that you’re the first to not like cartoons, I say you need to open up a little and be honest with yourself. Cartoons are not a childish fascination so feel free to admit your love for them. I know we keep getting told that there is a time and age for everything, but certain things are ageless. Cartoons are certainly among that group. And what’s so special about the things we do as adults anyway? As children, we may resort to childishness but as adults, we resort to adultery. Try both out and see which one has more disastrous consequences.

I have always found cartoons to be a great connector between people. Growing up I had cousins that were brought up in different towns in India. Now, in a country, as vast and varied in India, everything from your customs and food habits to your entertainment and language change every couple of hundred kilometers. While we didn’t always understand or agree with each other’s habits and lifestyles, cartoon time was when we were all in sync, and watched every little scene with awe, giggles, heightened attentiveness, and a sense of complete joy. After every session, we felt happy and inspired, and discussions that ensued during and after, betrayed no sign of disagreement or lack of understanding in each other.

Tom & Jerry, and the battles between Donald Duck and Chip & Dale were among my early favorites (I always cheered for Tom and Donald. Too bad the modern-day Donald in his big white house does not inspire enough cheer). To begin with, they are hilarious and even as adults a few minutes of viewership can melt away a fair bit of the day’s tension. They contain very little spoken language (which does not have to be understood), and apart from the tunes of certain classics produced by great musical minds of the past that play in the background, the only other sounds are the uproarious screeches, yelps, groans, grunts, gurgles, hoots, and cheers. Anyone can appreciate the quality and genius of the artwork, the animation, the storyline, and wit. The personality of every character is brilliantly designed and depicted, and any one of them could serve as our steadfast imaginary friend we never had. He-man and the Masters of the Universe and G.I. Joe were other cartoons I began to follow. While the previously mentioned cartoons inspired creativity, fun, and humor, these other ones illustrated the feats of heroes and superheroes, good over evil, me over examinations and school projects (And now with the ubiquitous nature of YouTube, stealing a few minutes of cartoon time at work even helps before client negotiations and deliverables).

Cartoons made me believe that I could get out of a tough spot even if it was only fourth-grade math. They showed me the importance of being positive, which has stayed with me till date. I was convinced that no matter what the odds (Cobra always outnumbered the Joes), I could be victorious, in elocution class then, and in life now. They instilled the confidence in me to wield my plastic sword (just like He-Man did) to make myself feel invincible and ready for any challenge ranging from potato sack races and handwriting competitions to hot dog eating contests and Pictionary. And of course, the less fascinating battles of life pertaining to education, careers, relationships, health, finances (or fiancés: the two cannot coexist), and overall development. I realized that I could keep aside differences with anyone over an hour-long cartoon episode, whether it was my sporting rival, the office jerk, my stockbroker (who believed that a broker is someone that is meant to make his clients broke), and the airport security (It’s only a penknife. Since I cannot decide which is mightier, the pen or the sword, this little tool settled it for me.). They make me see that it’s the simple pleasures in life that make us laugh loudest. It’s the childish exuberance within us all that helps us maintain our sanctum.

Cartoons were something I watched with my parents and grandparents, as I do with my 4-year old daughter today. They are almost like a family legacy, as much as the wealth and wisdom that is passed down from generation to generation. And they are so easily passable from culture to culture, and nation to nation, breaking down barriers with true value for entertainment, joy, and oneness.